We have come to realize that most buyers haven't heard about radon or the danger it poses, primarily because the effects of radon don't manifest until years later. Agents and home inspectors should, at the very least, have a basic knowledge about radon to properly inform home buyers.

Radon is a colorless, odorless, and tasteless radioactive gas. It naturally occurs from the decay of uranium. There are trace amounts of uranium in the soil all over the world. Some areas have higher concentrations of uranium than others, therefore increasing the chances of emitting radon gas. 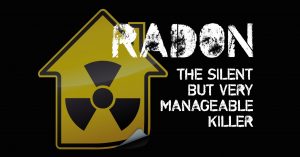 Radon is the number one cause of lung cancer among non-smokers. These gas particles aren't harmful until they are breathed in, as the tissue inside the lungs absorbs the particles. Radon is responsible for approximately 21,000 deaths a year in the United States. This is more than six times the number of deaths attributed to house fires and carbon monoxide poisoning combined.

How does it enter homes? Radon enters homes from the soil through openings and pores. Common entry points are foundation cracks, slab cracks, expansion joints, sump pump basins, openings around plumbing pipes, crawlspaces, and the pores of concrete itself. Homes tend to have what is known as stack effect. A stack effect is the natural rise of air in the home which can cause suction. The suction can draw radon in from the soil which causes higher levels within the home.

To protect buyers radon testing is recommended on all homes during the due diligence process. DON'T FEAR, the amount of radon in a home is fixable. The EPA has established that 4 pC/iL is the action level to have radon mitigation performed. A radon mitigation system is a permanently installed ventilation system which reduces the levels of radon in a home to within acceptable levels.

Home buyers and their agents should utilize the testing services of a professional company. Very often it will be a home inspection company which will use the appropriate radon testing device(s) for the situation.